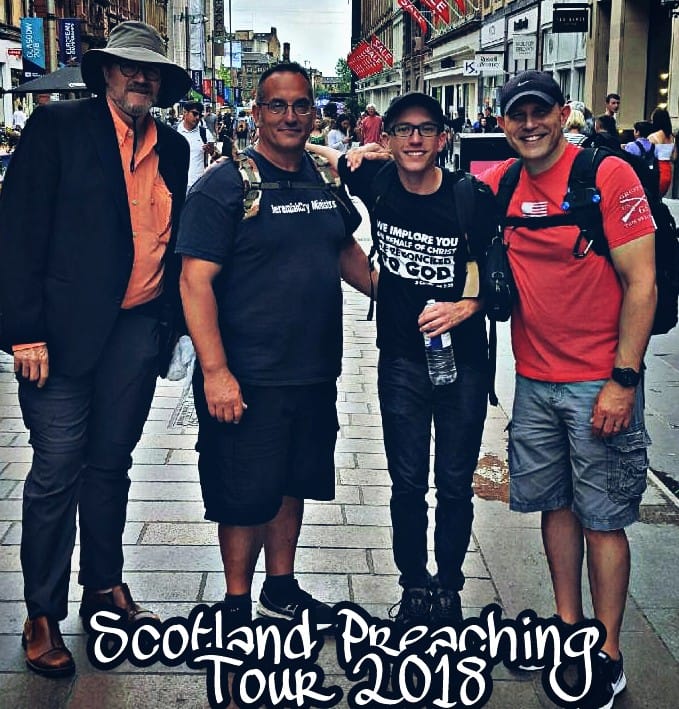 This post is the fourth in a series by Rob Nelsen.

I had the honor recently of joining JeremiahCry Ministries in their annual mission trip to Scotland. It was a blessing meeting brothers from all across the United States who are both solid in their theology and have a passionate zeal to spread the gospel of Jesus Christ.

While serving in Scotland, I was placed on Mike Stockwell’s evangelism team.

Short-term mission trips provide time to step out of the hustle of everyday life and consider life from a different perspective. I always appreciate the opportunity this provides for reflection.

This series is intended to highlight lessons I learned while in Scotland.

Praise God for the First Amendment

“Congress shall make no law respecting an establishment of religion, or prohibiting the free exercise thereof; or abridging the freedom of speech, or of the press; or the right of the people peaceably to assemble, and to petition the government for a redress of grievances.” Amendment I

Scotland is not a land that respects the rights of citizens and foreigners to freely speak their mind. There are so many restrictions on what you can say. Many times we had run-ins with the Scotland police simply because someone made allegations that we were using homophobic language. The police did not care to investigate, they would simply come and put an end to our preaching. Resistance would end in arrest. One of the local evangelists, a young man named Jamie, told me that if you even tried to go outside an abortion clinic to rescue the unborn you would be arrested within minutes. This broke my heart. I hate standing outside abortion clinics pleading for the lives of children, but at least my country gives me the right to fight. To cry out for the weak. Scotland does not offer this right and for it, the blood of innocent children is on the hands of wicked magistrates.

Being in Scotland and seeing the injustice done to preachers has made me love my own country more and more. For as wicked as America has become and is becoming, at least we honor the First Amendment. I do not want to neglect the rights I have in my country while I still have them.

One1 thought on “Praise God for the First Amendment”

Mike Stockwell and Robert S. Gray are full time evangelists, sharing the gospel of Jesus Christ with people throughout America, Europe, Jamaica and wherever the Lord leads. Distributing gospel tracts, open air preaching and pursuing one to one conversations are the means by which Mike and Robert proclaim and explain salvation through Christ.

Watch this excellent apologetics video: click here to purchase
Back to Top